What to do if you don't know what to do.... the Rules of Golf 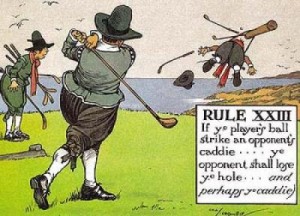 I always recommend to those who want to play better to PLAY MORE COMPETITIVE GOLF. That's scrambles, singles, tournaments, even a $5.00 nassau with their friends. Put some pressure on your game.  With that pressure comes another understanding of the rules - not because you want to, but because you HAVE TO know how to play them properly. Knowledge builds character, pressure builds game.

Eventually you'll run into a situation where you don't know what to do. We're not talking OB stakes or my ball is in casual water - we're talking something so weird that you just don't have it in memory and you don't have time to look it up.  What to do in this case?  Well in this case, the Rules of Golf have you covered. Invoke rule 3-3  and play two balls.  Record both scores and sort it out with the committee at the end of the round.  This is a very good rule to know and can be the difference between a disqualification and a 2 stroke penalty.

One thing that you must remember on this, the committee's final ruling is the final ruling. Wether they're right or wrong, there's nothing you can do because what they say goes so remember to be factual and record all information regarding the rule discrepancy all the way down to what people say!  It's true - even in the case of someone hitting a provisional ball. It's not a provisional unless they say the word "provisional".  Look it up.  "I'm reloading" or "I'm going to hit another" does not constitute a provisional ball and will leave you hitting 4 from wherever it ends up (hopefully the fairway!).

From things you SHOULD say to things you SHOULDN'T say. Don't ever give advice on a swing, and when someone tells you they want to finish, don't say "take your time".  Both constitute a breach of rules and CAN be used against you in the Court of Golf (if your opponent chooses to call you on it).  We all expect the gentleman's response of "thanks" most times, but if you get a particularly competitive opponent you could end up two down really fast.

The rules of golf are there to protect the course and (believe it or not) to protect YOU from inequitable results.  The color of a set of stakes could be the difference between putting you in a great position to play and being stuck behind a tree or going back to the tee. Seems worth it to me! From where and how you can drop to what to do when someone takes your ball everything is in that tiny little rule book. They're not as convoluted as everyone would have you think either. Start at the beginning and read a few pages per day.  You'll go through it in no time and have a better understanding of what to do and when to do it - even save you a few strokes!

FYI you get a "free" copy for becoming a member of the USGA - in addition to getting a  neat hat!  www.usga.org
Posted by The Club Nut at 1:21 PM

Email ThisBlogThis!Share to TwitterShare to FacebookShare to Pinterest
Labels: rules of golf, usga