Are you getting the "shaft" when you buy a club? - Part 1, sorta

A little on shafts ... just a little


There has been a lot of things circulating lately about shafts and how they affect performance.  One noted reviewer did a small study where he hit an X flex and senior (A) flex of shaft and noted that on the monitor there was no difference between the performance of the shaft, only the feel between the two.   Another is adamant that the performance of the golf club comes primarily from the shaft. Both are very well known and have massive followings - but who is correct?

The only way to settle this, unfortunately, is to draw your own conclusions. Good thing is, I can give you the knowledge and steer you in the right direction to do so.  I can tell you without a doubt that shafts absolutely make a difference. Why then, when you go to the box stores and try all the different clubs from different manufacturers, with different shafts do they all go about the same for you. Well, that's the rub. The shaft has to be a match for the swing and head that is being used. We've all heard big OEMs say "high launch and low spin is optimal for maximum distance".  That is true, in a vacuum, which is why there are so many shafts out there - what's good for one person to get high launch and low spin is not good for others!


Case A:  I took a tip-stiff shaft -  very little action, high kick point and low spin/launch. Put that in a low spinning head with a low loft and hit it. I put the best move I could on it, hit it in the dead center of the face. This was my ball flight.  Note the carry distance, total, and spin number.

I took the same shaft, in a lighter flex, which had higher launching properties than the original, and a slightly softer tip. This is pretty standard across the board, as shafts get lighter in flex, the launch properties change.  This is what the result was:

Note how higher spin and higher launch got me more distance - not an incredible amount...but that goes against the High/Low that is "optimal". The reason is because everyone swings differently. I have a slightly negative attack angle so i put a little more spin on the ball than usual and the effective loft that I deliver is low, which is why I launch a 10.5 driver at 10 degrees and less... Now, what happens if i put the 2nd shaft on the first head? Glad you asked: 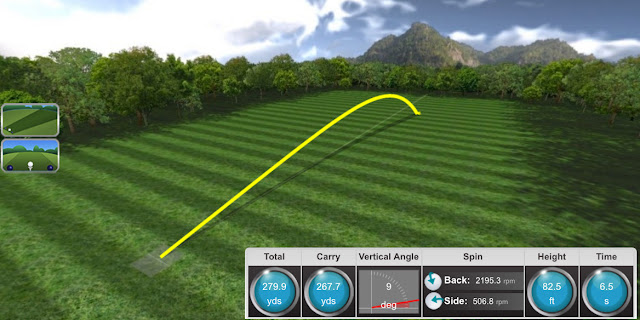 In this scenario, the higher launch, but lower spin head really negated the more active tip section but my total distance still fell short by a yard or so. Carry distance suffered 4 yards. Not a huge deal, and i'd take either one of these two combinations, but it does show - if not slightly - that high launch and low spin aren't universally better depending on what you want. On a standard surface it's less roll, but if i'm trying to carry a creek or get over a hill, i want to maximize carry. Hard pan will roll just fine. Know this - if one of these shafts was included in the build and the other was $200 more? which one do you think I'm getting? So what does this mean?

It means that shaft absolutely matters. Flex absolutely matters. Is one shaft better than the other? That's subjective, but if you're getting the same numbers and performance with two different flexes, there's something about your swing that's changing to compensate - wether it's tempo, release, or speed -- and honestly a shaft that's a good fit for you should complement how you swing and you shouldn't have to change for it or any piece of equipment for that matter.  The other side of that coin is that shaft type and flex doesn't necessarily matter as much as some people think.  Barring COMPLETELY improper flex (having a super stiff low launching X when an Lflex is needed), I've never had a fitting where someone increased distance 40 yards just by changing shaft brand or flexes.  You can easily gain 5 to 15 yards, but that's about max on average. More important is the DISPERSION benefit from the proper shaft ..... and a GOOD shaft at that. Distance doesn't matter when you're hitting out of the trees.


What makes a shaft good... and why are some so expensive... and WHICH SHOULD I CHOOSE?

Shafts, when swinging, are under a pretty hefty load sometimes. Even if you're not a big swinger and have a light flex, that sucker is still going to flex a good 5 or more inches off it's base line. This stores the energy of the swing and releases it (hopefully) at the right moment to power that ball down the fairway (or into the woods, depending on who you are).  Shafts have areas of stiffness, areas of flex, and different torque - all dependent on how they are wound and layered by the manufacturer. With new technologies and materials, shaft makers can even change flex properties according to where and how much heat/pressure is applied to the fibers. It's really amazing!!!

In my world, a shaft is "good" if it flexes predictably in all rotations. Or at least fairly so. Just last night i showed a client of mine what happens when you horizontally load a shaft and release it. We did it first with a high end OBAN Devotion.  Rotating the shaft, it was noticeably better and more consistent in one area than it was in all others - Good enough to get some performance out of but not absolutely necessary. We then did it with a $15 budget stick. We aligned the spine and it flexed just as repeatably as the Oban, but when we turned it off that axis..... oh lord. Like a drunk etch-a-sketch, that tip was all over the place, flexing and oscillating. How is that supposed to deliver the club to the ball consistently? No way i would install that shaft without FLO - and i don't. But that's the point.  At a price point over 10x what the budget shaft was, the Oban was much more suited to a driver where the adjustable hosel will be rotated and changed. The performance won't necessarily suffer if settings are changed. Put the budget one in a club like that and good luck, pal.  That is why when you buy an OEM driver, they have a BUNCH of high end shafts available - some for an upcharge and some not.... The upcharge are (normally) more consistent in their manufacture. The tolerances are tighter and it will perform better in just about any orientation. Making these shafts costs $$$$$ so that's why there are $1000 shafts out there. Believe me, you'll feel the difference.  The question is - do you need it? Unless your name is on the leader board every weekend, probably not. And no, having a $1000 shaft isn't going to put you there either.

So what am I supposed to do!!

Supposed to do? See a pro about your game. Get better.  What SHOULD you do?  Take better care of your equipment. When you buy that club, it's got a great shaft in it. Don't abuse it, don't break it - because to get one that's as good, it's going to cost you.  There are great shafts from yester-year out there. Old designs that were good in the day and can be had for a fraction of what a new one costs. Remember this though --- there are no caps on shaft performance. While heads are limited and new ones come out every year with a new gimmick, there's no way they can "out perform" a head that has been maxxed to USGA specs. There are NO SUCH SPECS for shafts. They need only be straight (except putter flanges) and of a certain length. Energy transfer, torque, flex, materials, diameter and the like are not regulated by the USGA. Look at the DG spinner wedge shaft... Weird right? It may very well bring your wedge game where it's never been before - all because of the design.  Manufacturers make shafts to do good things. This tech is growing and becoming better understood each year. Fujikura has taken millions of data points to create it's XLR8 line with specific properties to maximize loading and energy transfer. Same with Project X and their LZ series and HZRDUS line. Matrix improves on their designs (and graphics) each year and a number of boutique manufacturers are coming up like Veylox and OBAN.  Be aware as well when getting a high end "free" upgrade from an OEM. Make sure it's the version you think you're paying for. I know for certain that some big names are "giving" the HZRDUS black as a no upgrade. It is different than the "Handcrafted" version you see on tour and available for aftermarket purchase. Due diligence.

If you have the chance - get fit for a shaft. You'll be glad you did.  Hit everything they have to offer if you need to go to a box store, and for goodness sake - if you break a shaft don't just put any old crap in there. Make sure to go to a competent repair and fitting shop and talk through it with them. Don't skimp out on the price either. You get what you pay for. If you use an adjustable driver, you need to put that money back into the club if it breaks - look for someone selling their shaft, or get a proper quality one put in.