I am not yet a father. One of these days, Marie and I will have another little golf nut in the family (hopefully) and that suits me just fine. I'd love for them to take to the game like I did and to really enjoy it so I've already thought about and read up on the best ways to go about teaching them.  The thing is, even I never thought about equipment. 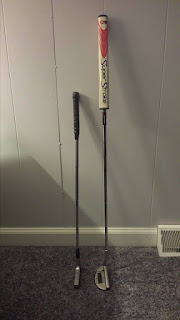 I played a lot of golf this weekend and I saw a lot more than a handful of junior golfers. It was great. These 8-13 year olds heading out with dad and mom to tee it forward and chase the little white ball around.  I even saw a guy teaching his boy on the range during an event. One thing I couldn't help but notice though - they all looked like they were struggling to swing the club. The more I thought about it, the clearer it became. Upon closer inspection of bags, most of them were playing with cut down versions of adult clubs. Even the ones that had "junior clubs" felt like sledgehammers to me when I picked them up. The time honored tradition about moving more weight low to help get the ball up doesn't apply to children and juniors. While it's a good idea, what good is it to have a club so heavy that the player can't swing it properly or even that the club swings them?  It would do nothing but engrain bad habits and wear-and-tear on their young body. Sure, it might be a good way to save some money in the short term because they'll grow into them right?....if they continue to play golf and have fun. 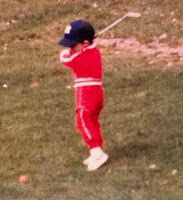 Let's take a look at a couple of photos - I'll expound upon them when I do my video. The first, on the right, is my first ever putter, ca. 1985, next to my current putter. It was long for me back then. There wasn't much in the way of different materials, so basically I got a men's putter cut down. It was (and still is) really heavy, even at this size that it is. Plus it was 24 inches long! That was more than half my height! (I was and still am a little short). Could you imagine swinging a putter that came up to your sternum - remember this is before the days of belly putters. I have really never been a good putter but seriously, that wasn't going to help teach me anything. Something I CAN do is hit the ball a long way and on line. I'm convinced the reason is because I got started early with the proper technique. Take a look at the second picture -  that's me swinging a 5 iron. A cut down, gripped, ground to remove a ton of material and weight 5 iron. I also had a 5 wood with about 1/3 of the head cut off in the back. Why did my grandfather do this? So that I was able to learn the proper takeaway and swing the club rather than having it swing me. It's tough to judge by a photo but believe me when I tell you that I didn't get thrown around by that club and because of that, I spent hours and hours hitting balls up and down the back yard at my grandparents' house -- and less time in front of the TV!! I make no apologies for the outfit.

To be frank, I see a good many parents/ grandparents/ aunts & uncles trying to get their future tour pro to "swing right".  Good teachers always mention that you shouldn't do this and should let them swing how they want to swing - moving feet, digging into the turf and whatnot. The reason children do this is because they somehow have to get this huge mass of metal moving when they themselves weigh about as much as a Neato Burrito! OF COURSE they're going to step into it.

Truth be told, it's absolutely impossible for someone of that size to swing properly if they don't have a club that's proportionally weighted for them. This  is why I have lightweight junior club heads. It allows me to build a club that is lighter than most any junior set out there, but still retains proper swing weight to promote good tempo and stroke.  You see, swing weight is largely dictated by your strength. What "feels" heavy to you may not be heavy to someone else. It's all a relative and personal thing.  Kids are sponges. They WANT to learn things and they will retain it very well. Anyone who's ever slipped a dirty word around their youngins can tell you that one. Why not give your little golfer the best start at the game. There will be less frustration, less "I'm tired can we go in?", and more fun to be had.