Your best golf... on the cheap: Part1

Last month I blogged about a great cigar for not much money. They're around $2.50 each, depending on the size. I love cheap. Cheap is good. Cheaper is GREAT! The problem with cheap is that it's not very dependable. Quite often, it's inconsistent and in the end it's not really worth what I paid anyway. Thankfully those Casa de Garcias have broken that stereotype. Of course, thinking in these terms, in walks "Custom".  Custom tends to be the opposite of Cheap.  Custom is so nice and perfectly fit to whatever I need.  I paid big money (to me) for a set of custom golf clubs. Length, lie, shaft, grip, weighting and probably most of all -- NAME.

If you've ever bought a golf product, you're paying a lot for the name. A hand towel at Wal-mart is maybe 4 bucks(?) but if you put (insert mainstream golf company here)'s name on that it goes to $20 and sometimes $30.  So i thought "what if I took my specs and built my own clubs for cheap to mimic these big box brand name clubs".  Out comes my personal "Maltby" irons. When you hear the name you may think of Rodger the Golf Channel/ NBC on-course correspondent and, for you older chaps, multiple tournament winner on the PGA tour in the 70s and 80s.  When you READ the name Maltby, it may or may not bring to mind Ralph Maltby the club designer from golfworks.com. Sounds the same, but it's spelled different. (10 points to guess the movie).


Ralph used to design clubs for Tommy Armour and is an all around fitting guru.  He developed the MPF or Maltby Playability Factor to rank clubs on how they will perform for different levels of players. With iron head price points at around $30 and shafts at about $10, I can build a set of custom golf clubs to my exact specifications for $300 or less, compared to the $1000 for the brand name clubs. I went ahead and ordered a Malby KE-4 hybrid iron and a Maltby MMB-17 8 iron to see if there was any confirmation to my thought process. Today I got them and decided to do a test against my current Titleist AP2 4 and 8 iron on the range for feel, playability, and general distance.

The 8-iron has a really nice look about it. Very "players club" with a chrome nickel plating and satin face area. Thin topline, thin sole. Turf interaction was stellar and it didn't dig as much as I originally thought it would. at 3 degrees of bounce, it actually scooped through the grass nicely! The ball came off cleanly with a much more crisp "click" sound and feel than my AP2 which is more of a muffled "thwack" with a solid but soft feel. I think I like the MMB feedback a little better because I can really tell when I hit it cleanly and when i hit it nearer the toe or heel which for me translates into MORE confidence if I miss a shot. At least I know why I missed it. 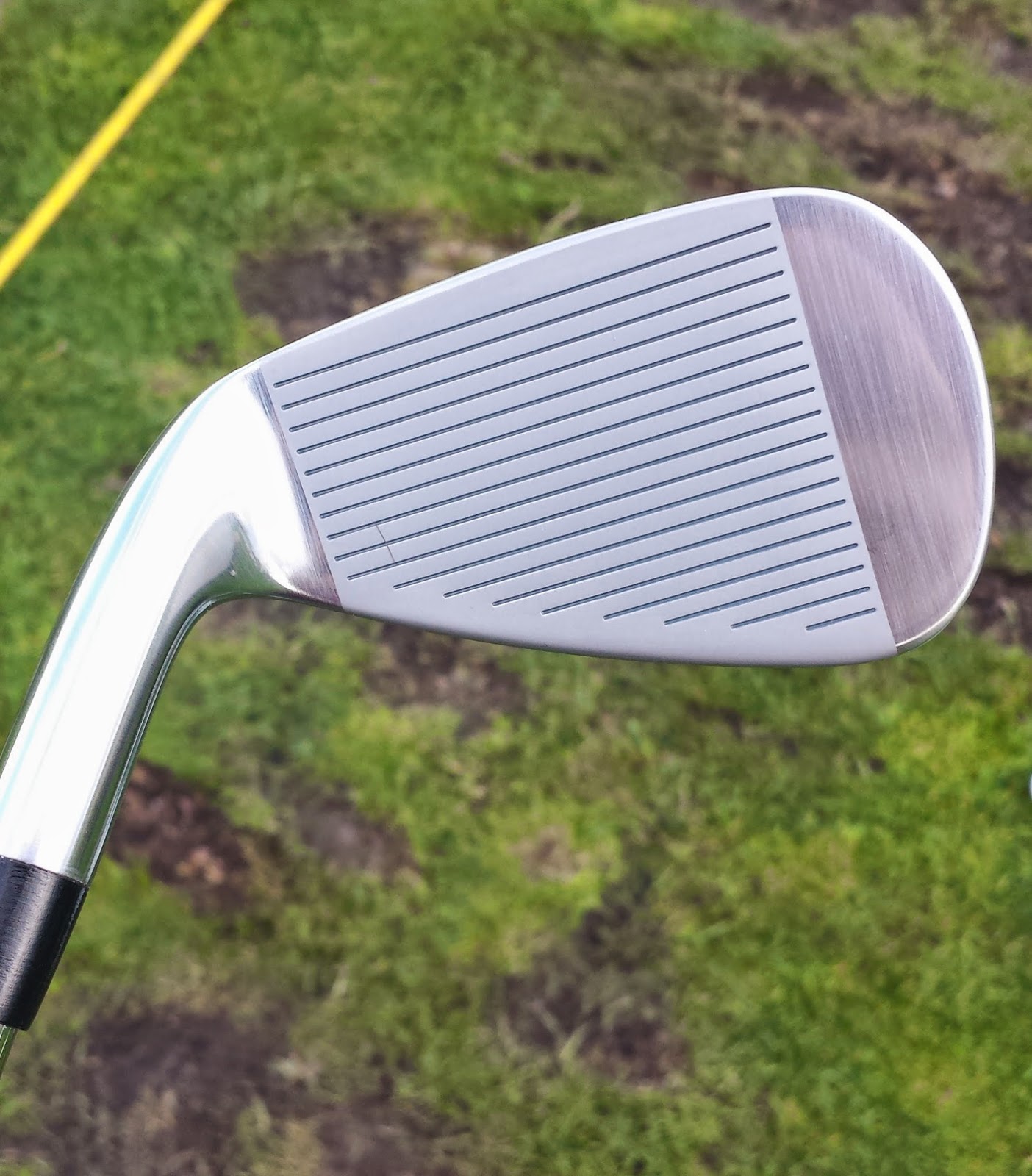 The shaft, a True Temper Command R/S flex (trimmed for Stiff), did leave a little bit to be desired. The shaft is designed for control and lower trajectory - and control it did. My shot dispersion was much tighter than my AP2, even on solid hits. I could also work the ball much more easily in both directions as well as up and down. The feel was somewhat looser than the S300 on my current 8 iron.  The Dynamic gold series have the shock absorbing "sensicore" inside. Basically it's a wire with foam wound up it in a spiral pattern. It's placed in the shaft and deadens any vibration coming from the head. I noticed it was missing when I hit one thin, but it wasn't as jarring as some would have me believe. I hit about 2 dozen balls with each and came to the conclusion that the only thing that MAY be missing is the distance factor. I hit my AP2 8 iron about 160.  I don't think I was hitting that all the time with the MMB. Still, I attribute that to the muscle back design. Traditionally, the forgiving zone on the face is only about the size of a dime or nickel whereas the AP2 irons are more like a quarter or half dollar because of the technology. I wanted a muscle back though because of the accuracy and I definitely got that.  When I get it on the course for part 2 and I'm really able to see the distance for myself instead of guestimating based on landmarks, then I'll be able to make a good decision.


The 4 hybrid iron is a very nice club in itself. This configuration beat out my current 4 in terms of feel and playability again. The graphite shaft absorbed the shock much better than the steel shaft even with sensicore (no surprise there really), but what really impressed me is the way the ball catapaulted off the face! Holy cow were my first words after one strike.  The ball flew higher and landed more softly than my current 4 iron for sure yet both have the same characteristics as far as length and swingweight. Judging by the flight, I will go out on a limb and say that the spin rate on the KE4 is much higher than the AP2 - which is exactly what I was looking to get for my long approach shots.  The KE4 has a wider top line and sole but the head is about that of a standard blade with very little offset. It's made to be a cross between iron and hybrid. I'm normally not a fan of "fat irons" but it really worked for my eye in this case and I think the shallow face helped that a lot. Turf interaction from the wider sole was really nice, regardless of the width and I didn't feel it digging in like my 4 iron usually does. I felt like it was much easier to hit than even my current 3-hybrid - which just seems too big to use in the rough or sometimes even from the fairway - so why bother having it? As for the Graffaloy shaft - it performed exactly as spec'd. Very light, stiff flex and high launch. I couldn't ask for much more --- but I did.  I demanded the ball do things that I normally have 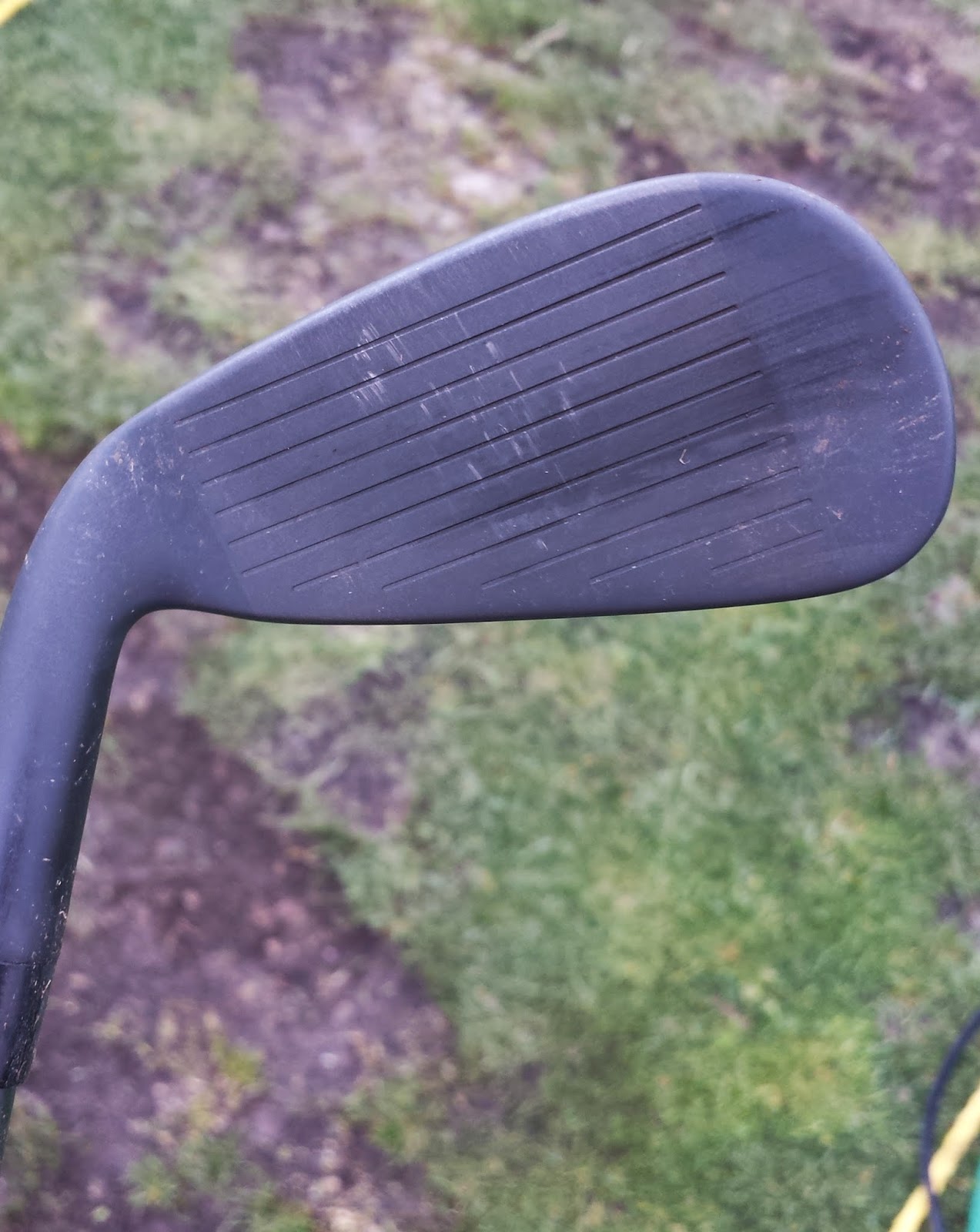 trouble doing with my current players clubs. In control, the KE4 with Graffaloy Pro Custom out-performed my AP2 w/ DG S300 smartly.  I was able to work the ball in both directions at will and had an easier time feathering the ball with the KE4 than the AP2. Normally my 4 iron is draw, un-willing fade and big slice as far as shot choices. The Maltby 4 iron actually flew straight and accurate and when I wanted to move the ball, I was able to do so in small increments. 5 yards, 15 yards, feather it just a couple... the shots were there when I wanted them and I didn't feel like it was a "lucky strike" when I pulled them off.  Once again, when I get it on the course for part 2 then I can really say if it's all over better.  One thing I think I definitely dislike about this club is the anodized black finish. I have the same finish on my Taylormade R11, but that's a driver. I don't hit sandy balls that much with it.  With this being a utility iron, it's going to have a lot of turf interaction and that's going to take a toll on the finish, wearing out a hit groove.  After hitting only a few damp range balls it picked up a few marks on the face already. Love that sweetspot though!